After a bit of a break for the holidays I took a detour from my WIP chaplain and captain.  I still have to post the D&D models that I finished for everyone in the main campaign that we play, but, our group decided to give the primary DM a bit of a break and do a one-shot.  For this one we allowed any race/class combination and we had some wild ones.

For me, I pretty quickly arrived on a half-orc bard, but with a twist.

I started my 40k collecting in the early 90s as a 9-10 year old.  While it was possible to order from the GW catalogue (and I did this eventually) I wasn't really aware of this at first.  And growing up in the west coast of the United States, there weren't any GW shops nearby (at that time).  So, I was limited to the few blister packs available at Book World and the few hobby stores in my area.  Not a great selection.  But, while I wasn't immediately finding the Space Marines that I was looking for, I did find something that would later become a gem.  Some of my first models were also some of the first that I primed - a series of Orks.  The thinking was to practice and it was good thinking.  Among that first set, however, were 3 that I new I wasn't ready to paint yet, and so they sat primed an waiting for ~30 years.

While back then I felt I couldn't do them justice, now I felt I was ready.  So with just a few weeks before a hard deadline for a wacky one shot D&D run I set out to paint my 3 Ork GOFF ROKKAZ.

(On page 79 of the 1990 Citadel Miniatures catalogue we have the 'GOFF ROK BAND' designed by Kev Adams, so we have an official name, and more importantly something to search for).  I wanted to see some examples of how others had painted them.  While I wanted them to be colorful, I also didn't want to go overboard and have them be too busy and/or look like harlequins instead of Orks.  Also, I wanted them to look like a unified band but still have individual style.  My searches found a few examples, less than I thought, but luckily I found a good one: https://sho3box.com/2014/01/15/goff-rokkerz/

Sho3box did exceptional work with his paint job so I decided to follow it, but with my own twist.  First, because I had a tight deadline, I was going to use contrast paint.  I had 3 colors of green - Creed Camo, Ork Flesh, and Militarum Green, so I decided that each one would have his own skin tone.  I went with the red pants, since red is a good compliment to the green, and then black and metals just like Sho3box.  My other changes were to go with white sneekers, a flame mohawk, more conventional metalic axes, and teeth grillz on 'Ziggy'.  (I stuck with Sho3box's names, except for the front-ork who I call 'Slaaaaash.') 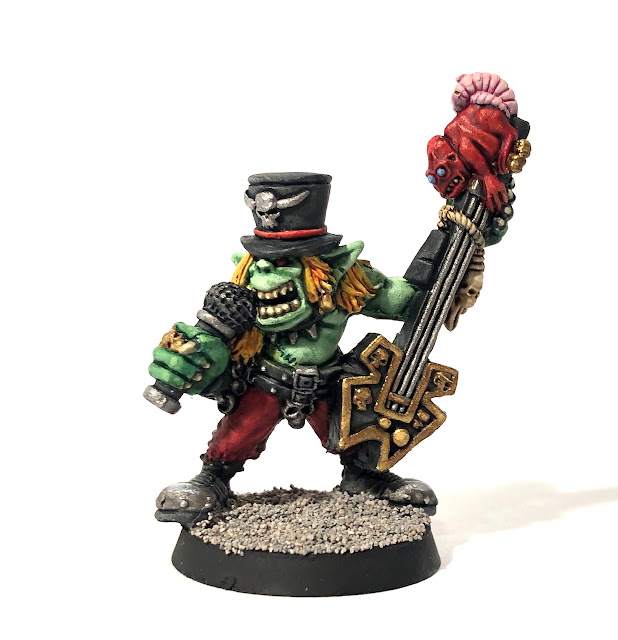 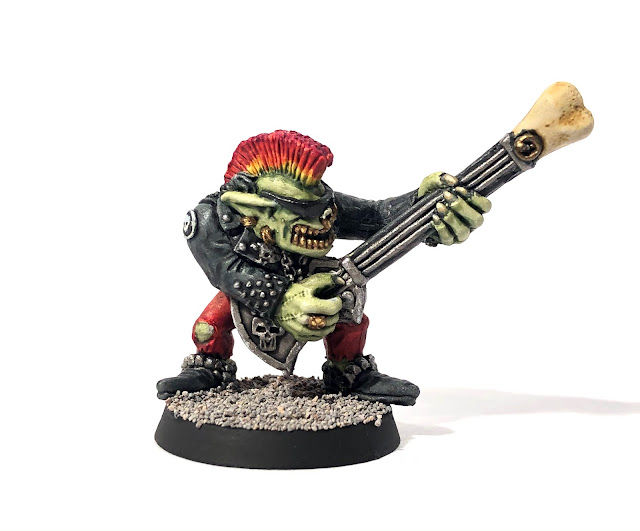 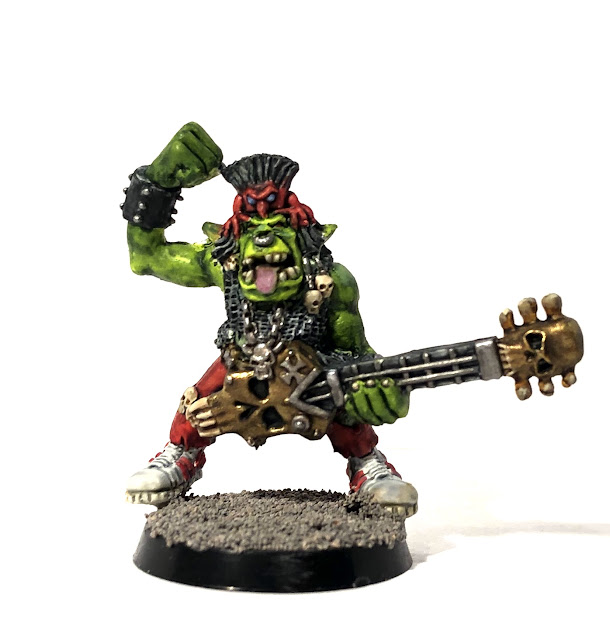 
I think they turned out pretty well given the time constraint I had.  Sho3box definitely takes them to the next level with the highlights though, so maybe I'll go back and add more, I didn't have quite the time for that this go around.  In my photos, the models tend to look a bit flatter than they do in person due to the overexposure to get the white background.  The D&D group loved my 'thunder bard' and the band mates (who made a brief appearance as an illusion)  I hope my character 'goes on tour' again sometime.

Posted by Astronomican at 9:48 PM

Astronomican
I have been collecting Warhammer 40k since Rogue Trader, however, I played my first game December 2012. I'm writing a blog to document my learning process both modeling and gaming in the 40k universe.

The Imperium is Vast...